This project was funded by the Senate of Berlin and the European Union (European Regional Development Fund).

A Strategy for Adaptation to Climate Change


It is impossible to foresee how climate change will exactly effect the peatlands of Berlin. If projections of climate change for the region of Berlin-Brandenburg can be relied on, a decrease in groundwater level will occur by 2046/55 („future scenario“). As a result, the groundwater-dependent ecosystem services of Berlin's peatlands would become increasingly vulnerable from drainage (SenStadt 2007, SenStadtUm 2012a).

The objective of the adaptation strategy of the project is reflected by its title:


The different tools to accomplish this goal are comprised of a range of detailed scientific data and works about all of Berlin's peatlands with a view to the followng target groups and levels:


The schematic below illustrates the process for application of the results for planners of peatland preservation projects. The climate adaptation modules, developed during the project together with their input parameters, were marked by a yellow background (we are sorry that the contents of images are not available in English): 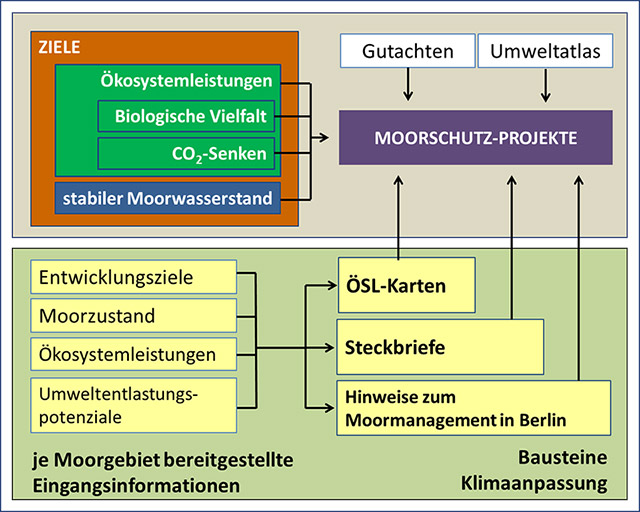 Goals of the adaptation strategy as well as modules and input parameters to enable prioritizing and planning for peatland preservation projects. The scientific information is intended to promote their realization and acceptance, and to improve the public perception of their variety of ecosystem services.


Additionally to the application for peatland preservation projects, the information provided can be utilized for socio-political benefits such as these: 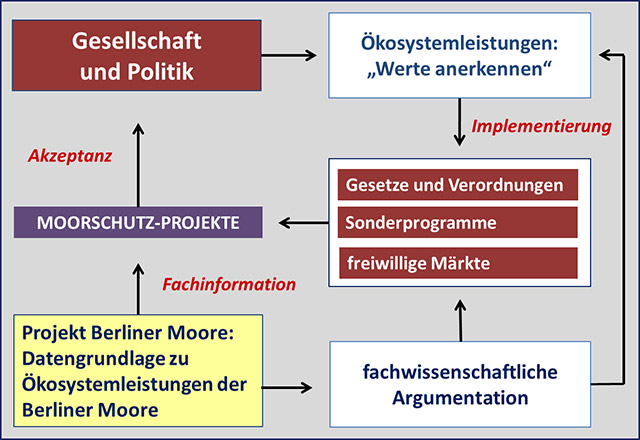 Objectives of the adaptation strategy (red) and application of the tools provided on the socio-political level.


The project's objective follows existing objective definitions of a number of concepts, studies and strategies in Berlin:


Objectives of the Berlin Strategy for Biodiversity (SenStadtUm 2012a)