This project was funded by the Senate of Berlin and the European Union (European Regional Development Fund).

Three most significant parameters were identified and used in order to assess the ecological state of a peatland and its capacity, to serve as habitat typical for the region (Ellenberg 1996, Succow & Joosten 2001). The degree to which a peatland was undisturbed served as most critical measurement:


Reference State for Parameters according to Nature Targets

As the natural characteristics of peatlands are dependent on their location, integration in the landscape, as well as water transport capacities and vary a lot, an adjusted assessment basis must be established for each site. For this purpose, several nature targets with typical site characteristics were defined, which represent the reference or target state of a peatland.

Nature Targets of Peatlands and their Site Characteristics as Reference for the Assessment of their Habitat Services. The categorization is based on ecological peatland types according to Succow (1988).

More details regarding the determination of target types can be found here:
→  Zuweisungskriterien

Determination of the Current Status

The determination of the status was established separately for each parameter using biotope types (polygons).

For the determination of the annual median water level or the water heights, soil and vegetation characteristics were used. The methodology is described here:
→  Core Parameter Water Level

The determination of the trophic status of a site was carried out using biotope types. For each biotope type from the Biotope Types List Berlin, which could be found in the investigated peatlands (for an excerpt, see table below), a typical trophic level was allocated. In exceptional cases, two levels were assigned (for example „eutrophic to polytrophic”).

Trophic Level and C:N Ratio to Classify Peatland Sites according to Succow & Stegmann (1988, 2001).


Data about characteristic trophic states for the peatland biotopes of the Biotope Types List Berlin were obtained using the following resources:


The C:N ratio of peatlands topsoils represents the trophic status as well as it expresses a certain type of vegetation (Ellenberg 1996, Succow & Joosten 2001). As part of the soil analyses, Corg- and Nt-contents were determined, and the C:N ratios of the topsoils were calculated. This enabled a validation of the theoretical, literature-based assignments of the trophic levels to certain biotope types. The laboratory results mostly confirmed the data from the literature. It was shown that the earthified topsoils of the fens (nHv horizons) with their mean C:N ratio of 14 (eutrophic; n=12) are significantly richer in nutrients than their earthified counterparts in transition mires (uHv-Horizonte) which were in stages of degradation covered by secondary woodlands and showed a mean C:N ratio of 25 (mesotrophic) (n=11).

Many originally treeless peatlands have been afforested or are otherwise endangered by woodlands growth today. These secondary woodlands (e.g. alder forests, pine-birch forest communities on peatland) are frequently ranked as undisturbed and are protected by law (FFH-LRT 91D0 Moorwälder). However, the trees compete with site-typical plants and in turn have detrimental effects on them through shading and shedding of their foliage. The assessment regarding the „undisturbed quality of biotope „structures“ serves as an evaluation of such woodlands on peatlands. If, for example, treeless target types have been identified based on existing peatland data or a soil survey (woody peat is missing!), the current wooded or forested area has to be given a negative assessment. The biotope types classification of Berlin lists the coverage by woody plants with 10–30, 30–50 and > 50 %. The critical limit for the coverage by woody plants was set at 30 %, as even unwooded peatland biotopes may be hosting some woody plants. When using the gradation of the Fauna-Flora-Habitat Directive (FFH-LRT) mapping (Zimmermann 2010), an area described as not completely forested but with more than 30 % coverage by woody plants has to be given a critical assessment already, as it is frequently an indicator of a negative trend for the peatland's water balance.

Additionally to non-native woods, dominating stocks of moor grass (Molinia caerulea) in transition mires during stages of degeneration or zones of tall gras (e.g. reeds) are also causing problems in formerly nutrient-poor, alkaline-rich fens for non-competitive, native mire types. Therefore, the stages of degeneration are considered to be negative indicators in a biotope structure, together with the non-native woods.

A comprehensive assessment of the current state is conducted through a progression of queries (see below). If the current state of a parameter deviates from the undisturbed target state, a partial downgrading is done. Already two negative partial assessments cause a parameter to be assigned to the lowest grade in the habitat services scale („moderately undisturbed“), because it has to be assumed that the mire or peatland is in a disturbed state and require improvement (high environmental relief potential). The nomenclature of the grades takes into account that the ratio of undisturbed peatlands, as opposed to other types of biotopes (e.g. lawn grass), is relatively high in Berlin, and therefore never „disturbed“. 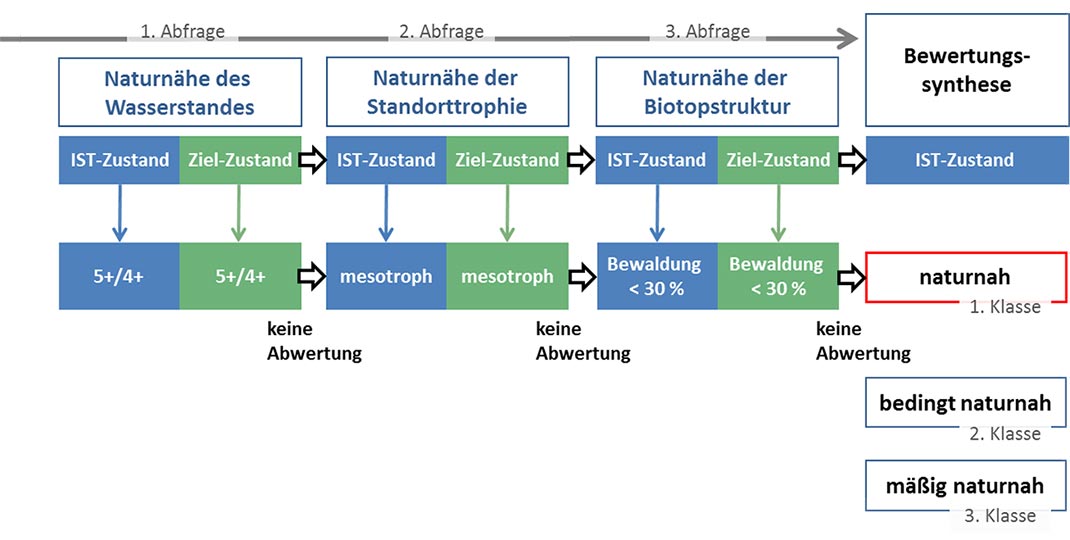 Example for a peatland with site characteristics of current state and target state in agreement with each other. The site is graded as „undisturbed“ and its habitat services are given a positive assessment. 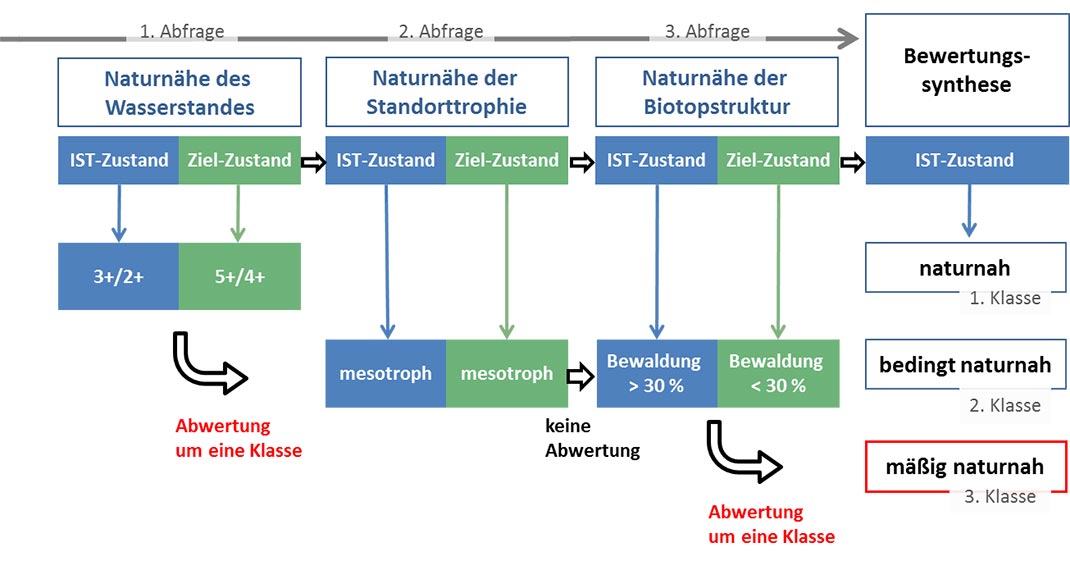 Example for a peatland with site characteristics of current state and target state not in agreement in two cases. This assessment matrix gives the example of a dry sphagnum bog, which is affected by secondary forest cover (e.g. moor birches), but does not show clear signs of eutrophication yet. The negative assessment of two disturbance parameters already leads to an assignment of grade 3. The site is graded as „moderately undisturbed“ and its habitat services are given a negative assessment.

Together with the Biotope Types List of Berlin for peatland sites, this assessment system for the habitat services can be applied relatively easily. Just the additional topsoil survey as an important information has to be added. Compared to other systems such as the „Biotopwertverfahren“ (biotope value procedure) commonly used in landscape planning it is beneficial here to focus on the agreement of properties or parameters of the peatland's ecosystem, as site structure and trophic status are assessed consequently regarding their degree of disturbance. Through the determination of a target type, misinterpretations can be avoided. This way, a pine forest can be recognized to have resulted from a drained and degraded sphagnum bog, which would otherwise have been considered a rare and highly endangered forest biotope worthy of protected status.